I’ve caught mentions of some fancy new extension-manager for GNOME on Reddit for some time now. This new manager appears to replace the combo of using a Firefox plugin and the Extensions application to manage your extensions. Featuring a interface reminiscent of Cinnamon’s theme installer, you can now search, install, and remove extensions right from within this app. It was built upon the newest tech in GNOME; gtk4 and libadwaita, so it’s sleek and will always match your desktop. It’s been available on flathub for a while now, but I’ve taken the liberty to bring it to our live system natively so it’s shipped as standard for all installations (or usb sticks) now. 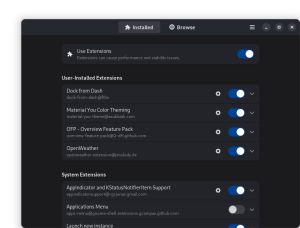 I’ll include it on the next ISO build, but for now you can always add it from a root shell with “slackpkg install gcs43” and it should pick up the 4 new packages (blueprint-compiler, extension-manager, libbacktrace, and text-engine) to install on your live system for you.

I’m also looking at a RSS extension to include which will notify users of new package updates right on the system so one doesn’t need to run slackpkg constantly hoping for gnome-boxes to drop (I’ll likely never ship it on this liveslak system).

Outside of keeping up with Slackware and GNOME changes, there isn’t too much more I’d like to add to this, or that I can even think to add to this. A nice graphical installer (calamares?) would be nice, and I’ve looked into it a few times, but the project hasn’t come together for me yet. Including PackageKit would be another dream come true, so the entire system can be managed from within gnome-software (much like Fedora can do), but Slackware doesn’t make use of PackageKit and the support for the distro is left unmaintained and lacking in areas that would likely require a coder with some sort of talents to get that up and going. I’m unfortunately not the man for the job, as those are areas I’m not proficient in. I can build a complete system that is beautiful and complete, but I can’t figure out that mess for the life of me.

It may end up quiet here for the next few weeks with holidays and many, many extra work hours coming my way. But I hope everyone has a chance this holiday to sit down and try this GNOME-based system, and if you do, I’d love some feedback on the experience and what you thought about it, any issues, compliments, complaints… I’ll take em all!

I know it was short lived, but the epic project name “gnackware” shall be nothing more than a distant memory soon. I didn’t go very deep with the name change, and as a result, it broke local installs of the iso image. So I reverted to the original (and timeless) name of Slackware. I do not wish to customize the OS (outside of providing GNOME). I want it to remain a vanilla install, so users can be assured the Slackware featured here is the same Slackware the rest of us use. And silly names change that.

Outside of that, these new images are currently up to date (and local installs work again!) but I’ve also temporarily removed the kooha package, as it is broken. I hadn’t tested the script here. I just realized I had made this months ago and hadn’t used it in some time. Recent changes seem to have broken it. Kooha will be back when I work out what went wrong.

Since I continued the work of the hacker rizititis on these liveslak systems, I had a goal of improving the live environment beyond a basic GNOME install to a usable upon first boot live system. Today I think I’ve achieved that goal.

I compared many other distros and what they ship as a GNOME Desktop and devised my set of “must-have” apps with GNOME. Then I set out to include all of their latest releases into the GNOME Liveslak.

Outside of the standard GNOME Desktop applications, the LIVESLAK now includes the following fine apps built-in for your live USB system:

There’s still a few more things I’d like to add at this time. A larger wallpaper selection, and the new extension app I’ve seen mentioned around reddit and parts a few times for starters. I’m sure there might be a few more things yet to do/add.

If anyone has any more suggestions, I’d love to hear them! Now go try out the new Codename: GNACKWARE LIVE! I’ve uploaded everything to the repo as well, so if you’ve an existing system, you can install any of the new packages on your existing live-iso, but with all the dependencies, I’d just write a new usb stick with this one. Enjoy!

Check the ChangeLog.txt for a list of all the new packages and the extras to add into the addons folder!

Finally after a week or so -current has been updated with a fix for glib2 so I’ve removed it from my repo so slackpkg will pick up the updated package.

I also uploaded a new iso today before these updates went live, so I’m making another one to upload eventually today as well. The one here currently does not have todays package updates.

Today -current was updated to include many libraries I’ve been shipping in the liveslak. http://www.slackware.com/changelog/current.php?cpu=x86_64 with today’s changes I’ve removed the following from the repo:

On -current glib2-2.74.1 has also been updated (which is in the repo), but it hasn’t been patched to fix the 100% cpu usage gnome-keyring bug, so I’ve left my build up for glib2 until this is addressed. Slackware’s vte package does not contain the GTK4 library, which is needed for gnome-console to function as well. To work-around this issue, much like I’ve done for libnma, I created a gtk4 specific package for vte and have added it to the repo.

To update an existing liveslak system properly, please run these commands as root:

This will ensure you pick up any newly added packages and update the live system as well. I will post a new ISO as well soon for new users, existing ones should be good to go with the above commands.

I built a new ISO today with todays -current updates as well as re-added missing packages to the repo for gunpnp plugins and the Ubuntu AppIndicator Extension was missing as well. I need to watch the wildcards I use when removing files, when updating last week I deleted more than I was attempting to do –oops!

I did a complete install of this ISO before posting it and it very well may be perfect. You’d be hard pressed to find a better system right now running GNOME 43, I’d venture to say that this being live, install-able and a rock-solid Slackware with flatpaks as well, that this is a better installation than Fedora. We don’t require reboots every update on Slackware, come to the dark side!

I just want to note here as well that I packaged up LibreOffice 7.4.21 for aarch64 slackwareaarch64-current. It’s an initial build done without kde-integration and without java as well. (zulu java reports as 32bit from the 64bit installer). LibreOffice was built from a slightly-modified AlienBob SlackBuild, and eventually I’ll work out the rest and update the build. It takes quite a bit of hdd space to build up, over 17gb for the process!

This is a gtk3 based application suite so it naturally fits right in on gnome once installed. You shouldn’t need any extra libraries to use it on a aarch64-current machine, so add the repo to slackpkg+ and get word processing!

For the longest time it seems we have struggled to get users to understand they must edit /etc/rc.d/rc.4 and remove multiple –nodaemon flags present in the file — but struggle we will no longer! 0xBOBF has came up with a workaround and users will no longer need to edit this file on their system! Leaving one more bit (a small one) of vanilla Slackware untouched while installing GNOME.

Also, a few weeks back I had updated flatpak with some changes I took from AlienBob’s script he recently created. And it completely destroyed my flatpak integration from working as it should (icons showing up within GNOME Shell, etc) and so I’ve undone those changes. I re-worked my script to now include the flathub and gnome-nightly repos installed system-wide by default, and left the rest alone. If it ain’t broke, don’t fix it.

As of now, users of the liveslak can install the system and have it operate correctly out of the box (finally!) or keep on using the live system and you’ll not notice any changes, it’ll work exactly like it did before.

Get the latest liveslak build!

Recently, I noticed that in a GNOME session the gnome-keyring process was constantly taking up 100% of a cpu core. Naturally, I killed it, and it was fine, so I went upon my business. But then I noticed it on my next boot, and then I noticed it on another machine with a different version of software and before I knew it, I was scouring the net for answers.

Turns out, an old bug had resurfaced in some changes to code within glib2 and had shown itself in both 43.1 and 42.6. The bug was introduced in glib2 1.74.1 (but was occurring as well on 2.72.4- likely the same changes were backported), so I naturally downgraded the libs and moved on while waiting for a patch to come.

A patch has finally come, so I’ve updated the gcs43.1 and also upgraded gcs42.6 (aarch64) repos with the new packages. As well as a few other updates on aarch64 for webkit2gtk 2.38.2 and libadwaita 1.2.0, in preparation to likely ship GNOME 43 for aach64… eventually… I’m in no rush and 42 runs pretty well without many library updates on that port. Before 44 comes out, I’m sure I’ll ship it (it’s plenty build-able on your own anyway). 42 needed those webkit updates, as I can’t imagine building that on a normal aarch64 machine (M1 to the rescue!).

I’ve also updated the liveslak with -current and the new glib2. That’s all for the rest of the week out of me. Enjoy!